The Landscape for street and circus arts in Morocco

In the frame of the 2nd KAHWA meeting, co-organised by Circostrada and the cultural association Racines in November 2018 in Tiznit, as part of the 3rd edition of the General Assembly for Culture, Claudine Dussollier provides an overview of the circus and street arts landscape in Morocco, and highlights the dynamics and issues at stake at local, regional and national levels.

The landscape for street and circus arts in Morocco features dynamic teams, talented artists and organisations that do much in the fields of creation, production, promotion, training and research. Many of these cultural players form partnerships with a range of European representatives, securing invaluable artistic experiences and cooperation for all those involved.

However, these teams do not receive the recognition they deserve, nor any real support from the public sector and regional organisations, which significantly weakens the functioning of the sector and obstructs the professional development of artists in Morocco.

...that is taking shape in spite of it all 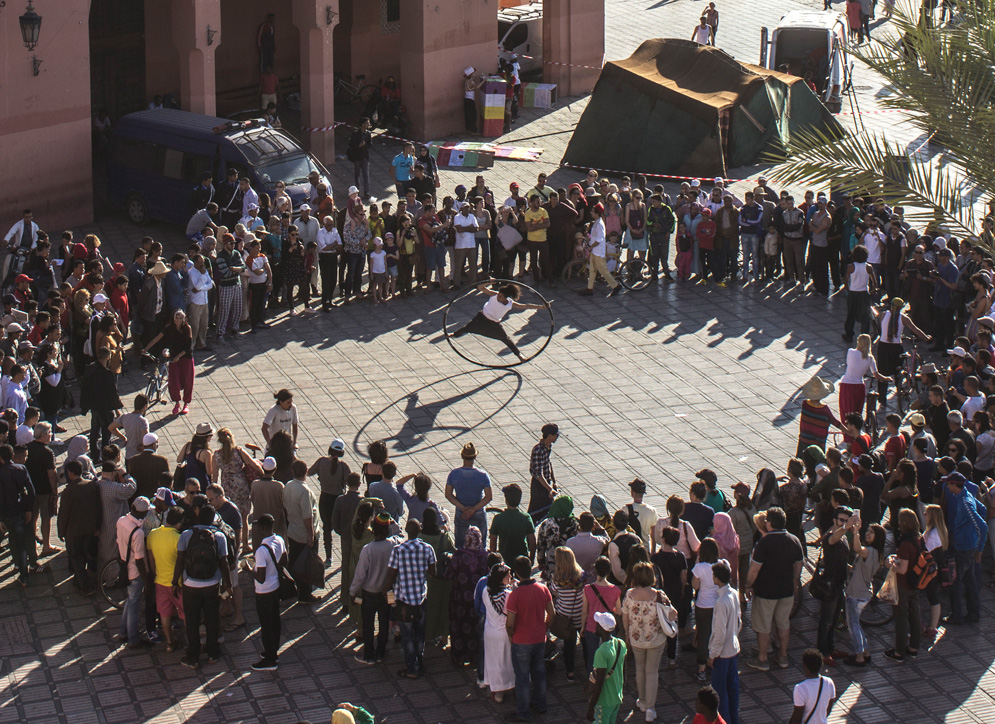 From Marrakesh and Tangier to Oujda, Salé and Casablanca, those involved in the arts and with the public are running projects, fes- tivals, biennales, open spaces and initiatives relating to circus and performance arts.

The talents of Colokolo and the Groupe acrobatique de Tanger are internationally renowned; the École de Cirque de Salé has trained many circus performers over 20 years reaching more than 200 young people looking to start their careers; the Théâtre Nomade, in Salé and Casablanca hosts many young people inside their big top and provides a variety of training courses while producing and touring shows that blend street arts, masks, pup- petry, acrobatics and commedia dell’ Arte performances.

For the last 15 years, Marrakesh-based Awaln’art has been helping Moroccan, European and sub-Saharan African artists to rediscover the city, offering a new fusion between popular traditions and contemporary street arts.

These initiatives have been long-lasting, meaning that, two decades later, their impact can be measured. After having created four shows which became global sensations, it is in Tangier itself that the collective of acrobats decided to base themselves, opening their own residential facility and studio.

In Marrakesh, after ten years of the Awaln’art festival, the Éclats de Lune collective are shaking things up with a new urban laboratory in a former wasteland dubbed “La Cimenterie” (Cement Factory).

In Salé, the École de cirque de SHEMS’Y has launched Karacena, an International Circus Biennale that is the visible part of its public platform for art in the Mediterranean. In addition, it has opened a new venture in Fez, confident that there is a role for young people in this renowned artistic city, bringing together the circus school, the population and an international public with an interest in sacred music. 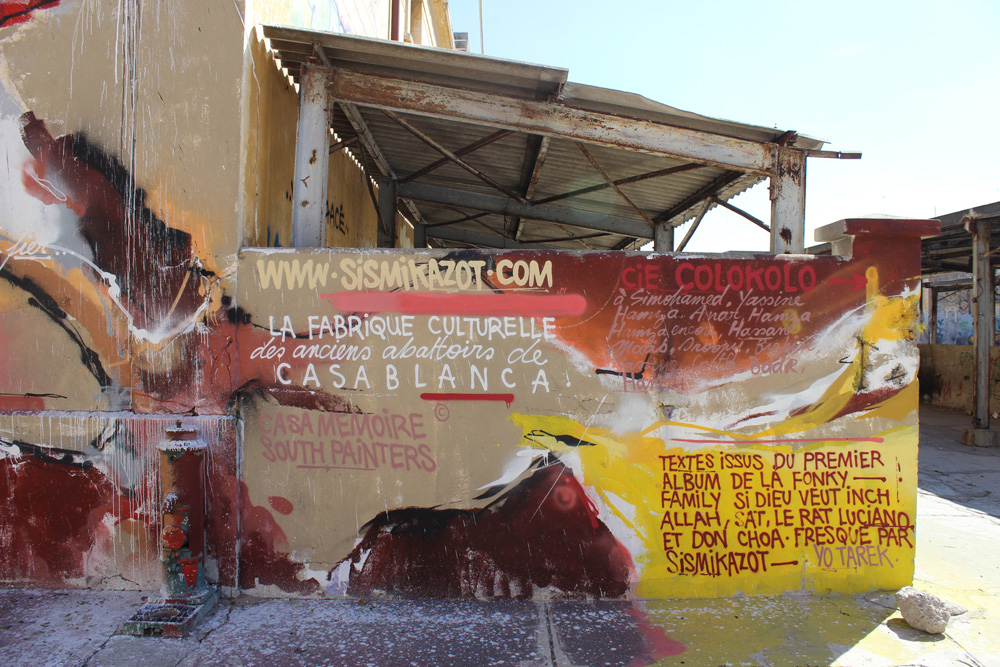 The Théâtre Nomade is preparing to hit the road again in the rural areas of the Salé region with both big-top and street shows, while maintaining its base in the centre of Casablanca for as long as they are able to retain the former slaughterhouses as their premises.

These initiatives as well as others like the Karane Festival  in Oujda are making their mark on the map of Morocco, forming an incipient network of street and circus arts groups active in nearly half of the country’s 12 regions. It is this growth that Racines, a member of the Circostrada network, started to highlight in 2014 with its inaugural Moroccan “États Généraux de la Culture”.

From storytelling to acrobatics, sacred music to Gnawa, religious celebrations to urban and rural festivities, Morocco is rich in multiple traditions that often echo those in neighbouring countries to the East and South. A crossroads between Africa and Europe, Morocco has always welcomed merchants, travellers and artists who have brought their cultures and skills with them. Today, sub-Saharan migrants continue to cross Morocco, like those encountered during the evenings in Tiznit, waiting to set off on the next stage of their journey. The country is at once African, Arab and European, and its local and popular cultures are powerful sources of inspiration.

Contemporary artistic endeavours are not turning their backs on these riches. On the contrary, they are embracing them. Since early 2006 Khalid Tamer1 and Alwaln’art have been working to create links between the acrobats of Jemaa el-Fna Square in Marrakesh and performing arts and street performers. Their programme is expressly focused on bringing together extremely different art forms by arranging residencies and collaborations for African and European artists, and through workshops producing collaborations between young Moroccan and international artists in all disciplines. His aim is to revitalise tradition through creativity, thereby opening up new perspectives and possibilities. The interplay between tradition and creativity also forged the destiny of the traditionally trained young virtuoso acrobats of the Groupe acrobatique de Tanger who, at the initiative of Sanae El Kamouni2, joined forces with Aurélien Bory, a French circus performer invited to give a workshop in Tangier with the support of the Institut Français. Their performances – the outcome of true artistic fusion – have toured the world. Ten years and several shows later, the collective of artists is refocusing on their home town, reinvesting in the tradition and realities of society to draw new inspiration and create a vocabulary that will support this new artistic synthesis.

Numerous examples currently exist of fruitful fusions between traditional and performance arts in Morocco that cut across the dynamics of street and circus arts. 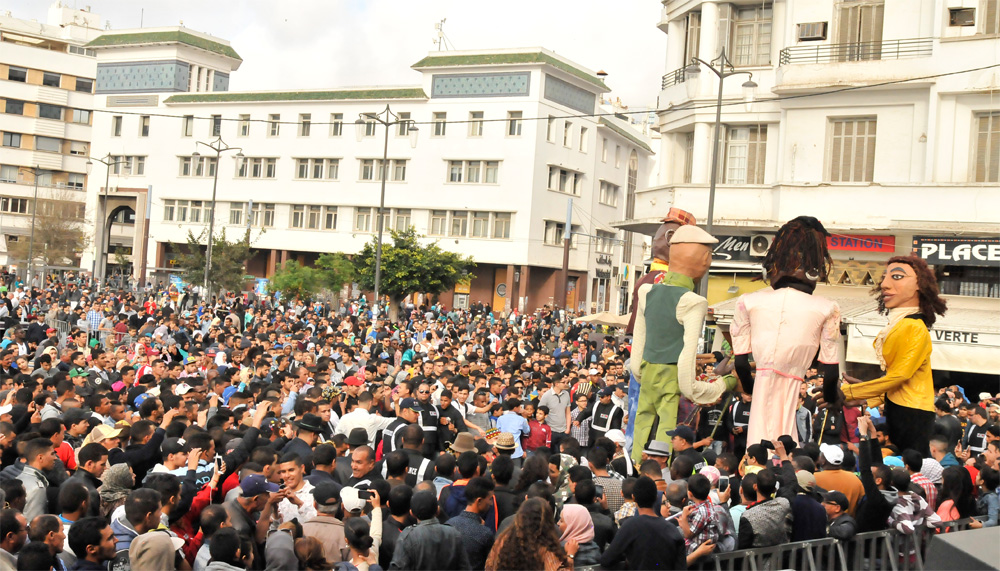 “There is no lack of audiences in Morocco; the slightest incident and there is a crowd of spectators”. This remark by Aadel Essaadani3 replaces the democratic significance of art at the centre of the debate. For artists who want to perform in public spaces, the issue is more one of appearing in public with a high-quality performance that is both entertaining and inspiring. This desire to ‘educate the public’ is important to the teams involved in KAHWA. The educational dimension of their work is key to many of them. This aim, in tandem with a commitment to high artistic standards, is easy to understand in a country where the vast majority of the population is distanced from all forms of culture apart from traditional festivals, television and social media. The national education system is insufficient, and public policies are struggling to respond to the expectations and needs of young people. In this context, performing in public, including the community in initiatives and training young people in artistic skills are means of addressing the overwhelming need for education for all. Even when financial resources are scarce, these projects contribute to the creation of new public spaces within neighbourhoods, towns and villages.

Despite the vitality of urban cultures, creative endeavours and public performances are subject to regulations and prohibitions relating to political demonstrations. This classification places significant limitations on what is possible, and artists performing in the streets of Casablanca or elsewhere may be arrested at any time and their instruments confiscated. A lobbying programme that seeks to change the law governing freedom of expression in public places through the creation of a distinction between artistic and other kinds of event is currently being deployed. This would avoid the difficulties that frequently arise from decision-making that relies on the authorities’ interpretations of performances. KAHWA participants highlight the fact that artists who perform innovative work in public often concern the authorities more than stilt-walkers or fire-eaters! Entertainment versus creativity.

The three workshops organised as part of the KAHWA event were focussed on the sharing and comparison of professional experiences. The dominant concern is the absence of adequate financial resources to develop artistic projects. When a company develops a new show, it will only be performed in a very limited number of festivals due to a lack of venues with the financial resources required to purchase it. The sector is still far too reliant on European cultural institutions, particularly the Institut Français, when it comes to reaching audiences. The only way in which a Moroccan artist or circus company can perform and evolve artistically is to do five or six dates in Morocco and then tour abroad. The Ministry of Culture sometimes puts out calls for projects. However, without any continuity, these occasional measures do not allow organisations to introduce any long-term residency programmes or collaborative projects.

As a result, Moroccan artists and performers are highly dependent on overseas institutes, private foundations and European backers for project financing. This situation is not without its consequences: it sometimes leads to let-downs and fails to cater to emerging needs. There is unquestionably a need for a proper public cultural policy at a national and regional level in Morocco. Despite the fact that most recognised artists, circus performers, dancers and street artists are obliged to work outside of Morocco to earn their living, some aspire to perform in their own country. However, they do not see this as a possibility at present.

There is no lack of ideas and needs. Some are fulfilled, others, outstanding: artistic and professional training, pooling of resources through the creation of a production and promotion agency, further international cooperation. On the latter point, there is strong interest in the French operation Africa 2020, but it also raises lots of questions. Exceptional cultural events such as ‘Marrakesh, the first African Capital of Culture in 2020’ represent real potential in terms of visibility and artistic recognition for street and circus arts. In addition, the creation of the Federation of Street Arts is an initial step in organising the profession, drawing recognition and support for operators and artists.

Cooperation: the challenges of “copy/create”

KAHWA participants from Morocco, Europe, the Middle East and Africa all agreed that international cooperation provides artists with confidence and recognition. It bolsters budding careers. However, relying solely on external funding and submitting to, rather than controlling, outside influence on aesthetics carries certain risks.

Retaining autonomy within a collaboration calls for reciprocity, an understanding of the other party and a shared view of the development of a partner’s region, be they European or Moroccan. The concept of twinning organisations in different countries is a possible source of new approaches to interna- tional collaboration. Several co-productions and collaborations with partners of the Circostrada network are cited as examples. It seems possible, and indeed desirable, to seek further new models for international partnerships, which would benefit artists, companies, organisations and the partners’ respective regions. To draw inspiration from European production systems, but to create methodologies that suit the Moroccan context.

At its heart, the philosophy of cooperation is about getting out of one’s comfort zone, understanding the expectations and constraints on both sides and making time for dialogue before co-creating projects.

Morocco: a country where culture is the solution 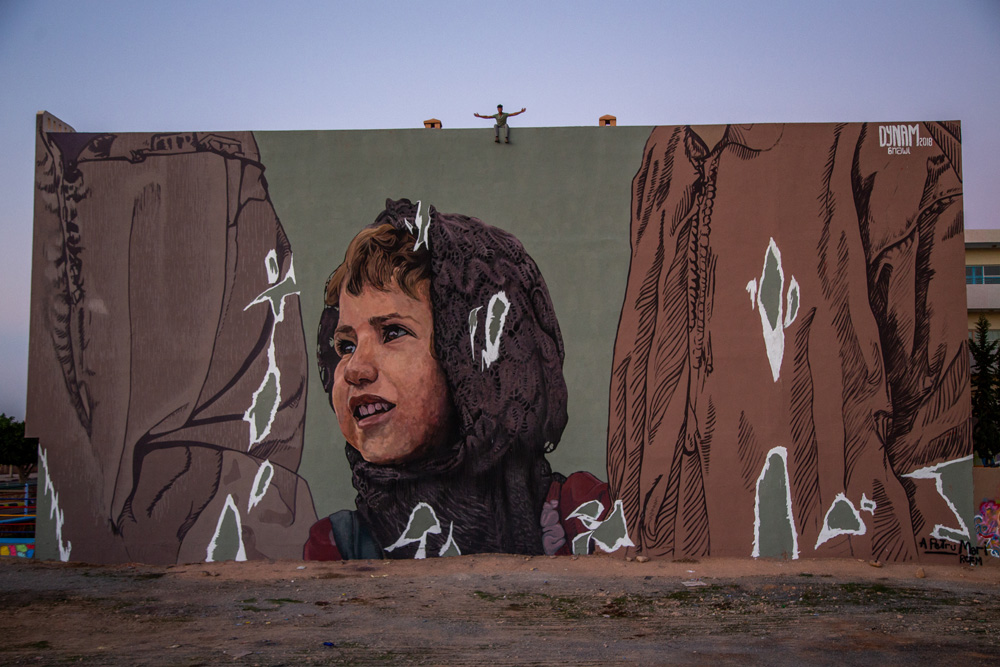 This KAHWA was part of the third États Généraux de la Culture, which has been organised by Racines since 2014. This year’s event focused on ‘Cultural policies in the regions’. Organised to coincide with the Amur'Art festival in Tiznit, this two-day event focused on the implementation of the new Moroccan law on regionalisation and the role of regional communities in implementing regional cultural policies.

These new regulations improve the prospects of gaining reco- gnition of the artistic strengths and potential in Moroccan regions. The next steps will be to bring performances to towns and villages, host performers on a regular basis and integrate culture into regional development. Issues faced by those involved in street arts and raising awareness of circus companies and urban cultures in local and regional communities were, of course, also part of this two-day debate. However, tangible prospects are still few and far between in a country where culture is also a solution. 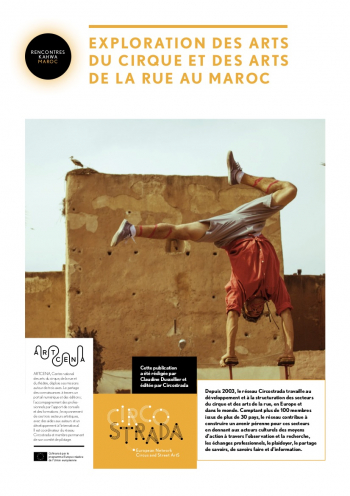 AN OVERVIEW OF STREET AND CIRCUS ARTS IN MOROCCO 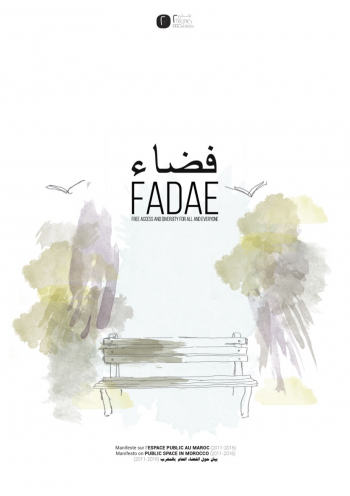 Claudine Dussollier
Claudine Dussollier has been trained as a geographer and cultural engineer; she is a member of Transvercité, an editorial counsellor and managing director at Editions Deuxième Époque and l’Entretemps.   After holding a position in the field of immigrants’ integration and social and...
Read more