by César Omar Barrios, published by Circostrada in " Fresh Circus #5 - Circus is everywere ! "
Circus
OUTSIDE PERSPECTIVES

As much as creative projects can alter a territory, they are in turn formed by their surroundings. The Mexican circus festival FiCHo grew out of a company, Les Cabaret Capricho, but also out of a city — Guadalajara. César Omar Barrios, one of the organisers, takes up the tale.

Guadalajara is the second biggest city in Mexico and it’s very conservative. On the one hand, we have a lot of Catholicism and Catholic influence. On the other, we have a privileged location in the country: the city is in an economically strong area, with a lot of business, a lot of enterprises. It’s not far from the US, not far from Central South America. So, there is money, there is religion, but there is also a lot of class conflict and oppression. This is a horrible mix. When I was at university, we would call it a two-faced city — a city of opposites. It is rich, but with a lot of poverty. It has the biggest gay community in the whole of the country, and it’s the city where there are the most deaths connected to homophobic attacks

In this context you’re angry when you’re young because you feel there is a lot of oppression. But you can also create a lot; the social exclusion, the feeling of oppression, creates a counterculture of artists who want to challenge the conservatism. The audiences as well: they also need to see things being broken to be able to breathe. What you mostly find in Guadalajara is traditional mariachi, pop culture, conservative things like classical music. A lot of people want to escape that.

For two years before starting FiCHo we organised cabarets every month. Each one had new artists, new acts, a new venue, a new theme. They would last six hours. If the audience didn’t like what they saw they could throw cabbage at the stage; or if they did, flowers. Our inspirations were lucha libre and fiesta: two things that Mexicans love. We won’t buy a ticket to the theatre, but if you invite us to a party, a fiesta, with bands playing? Then yes, we’ll come.

The other inspiration was teatro de carpa — ‘tent theatre’. It was a style of performance that rose up in Mexico during the 1930s and 40s, a format mixing circus and cabaret, with a lot of comedy acts who over time became famous. The whole style was very Mexican, but at the same time very universal. We’d say it’s a mestizo thing — a mix, just like Mexicans are mestizos because we’re a mix of indigenous and Spanish peoples.

When we started the cabarets, we didn’t have many circus artists in our city, so we had to invite people from dance, rap, graffiti, every kind of theatre or music. It was an open laboratory for experimentation.

Over time we got to be known in Guadalajara. With audiences, but also with the Mexican circus artists — old travellers — who were passing through town and would come in to perform. Naturally the cabarets became a kind of meeting place, and so we decided it was time to make the jump to a big festival. The first edition was in 2011, and we’ve had one every two years since then.

A lot of people are surprised when they come to FiCHO. They get to see shows they could never find in any other festival, nor any theatre, so perceptions of circus are changing. It’s a very slow process, and our influence is very small, but we have a captive audience and the number of Mexican circus companies is rising. When we started there were three companies in our area; now we can count 19.

We usually call what we do ‘urban circus’ because the traditional circuses are based more outside of towns. In Mexico, most of the people who are doing it make their living from something else. In Les Cabaret Capricho we have biologists, filmmakers, engineers. The closest thing to circus is one performer who trained as a dancer. What this gives us is a community of professionals who are, perhaps, a little more questioning in the way they approach circus. It’s not better or worse, but they have a different perspective to someone who went straight into the field.

These days about 60% of FiCHo’s programme is international. We need an international festival because we need international influences. With the younger generations it’s as if they got into the University of YouTube: they learn online, which is OK, but they’re missing a lot of history. With the jugglers, everyone knows Wes Peden but nobody knows Jérôme Thomas.

At the same time, we’re always talking about how to make our own circus. Mexico is a copying country. It’s in our culture. Before the Spanish colonisation we were around 160 nations, each with its own culture and language. Then came the Spanish and Catholicism, and more waves of immigration from the Lebanese, the Jewish, the French. So, we are always taking from here and there, mixing things up — it’s the mestizo identity. It’s OK, it’s who and what we are. But you can also lose yourself in all this mixing. You can copy something in a way that it never really passes through you.

Being international has opened a lot of doors and opportunities for us. It has also given us a sense of security. I think in Latin America, and in Mexico especially, you always feel less: less than Europe, less than America, because you have less money, fewer opportunities.

When we come to Europe, we’re always asking ourselves in the discussions, When will we have these French conditions to create circus? It is like a dream, almost absurd: in France there’s all this investment in circus, in culture, all these facilities. But then we meet people from other parts of the world, from Eastern Europe say, and we feel we have a lot in common. Not only in terms of conditions but also in the spirit of things: you realise that there are a lot of things you already have, and that France is paying for. Freshness is one of those. France has to pay its artists so that they can create, so that they can focus. For us, we need to create to have work; we have to really commit to research, to being authentic, in order to earn our place.

Sometimes I even feel we’re more engaged because of the lack of resources. We do it anyway. And we have an enthusiasm; we just never stop. Mexico is now in one of the bloodiest moments of her whole history. Violence everywhere, dead people everywhere, blood everywhere. And still people say: We need to get out of this. We will get out of this.

For artists there is always provocation, always stimulus. They feel like they need to do something. 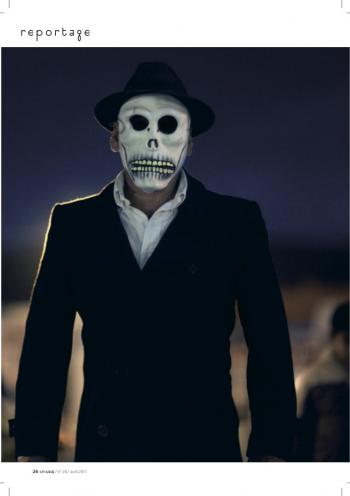 César Omar Barrios
César Omar Barrios is a multidisciplinary artist: actor, dancer, clown and performer who explores stage work in all its diversity. Since 2011, he has been working as an actor and artistic director with various collectives including Pneumus and Les Cabaret Capricho, which he founded in 2007. He also...
Read more